Spring and summer-like in flavour, these strawberry cupcakes with lemon swiss meringue buttercream are fun to make and refreshingly light!

The photos and recipe for these strawberry cupcakes with lemon swiss meringue buttercream have been updated as of May 14th, 2016!

I am stressing out with everything that is happening lately!

Don’t get me wrong, it all leads to positive changes, but when it happens all at once it can be overwhelming.

After wearing glasses since halfway through kindergarten, I am FINALLY getting laser eye surgery! Yay! I am excited, and a tad nervous, but it is a hassle with 3 appointments all being an hour away and two of them being on Easter weekend. It might just be my nerves talking, but I think about it at night so I am not sleeping well. Everyone states it is the best thing they could have done so I am just worrying for nothing.

We have also been tackling some major house upgrades since the first week of the new year. New hardwood floors through the ENTIRE house, and doing all the work ourselves. Remodeled our bedroom by ripping out tons of drywall and putting up new stuff (leaving me with the awesome task of mudding!) Then there was the plan to remove a wall upstairs but turns out that might not be as simple as we thought. Doing all this ourselves has saved a ton of money, but we have been living in a construction zone. Finally got the hardwood into the kitchen and I decided to re-oil my counter tops (butcher block) at the same time so I was left to prep everything on my kitchen table for three days… Finally getting back to normal, but soooooo much dust!! 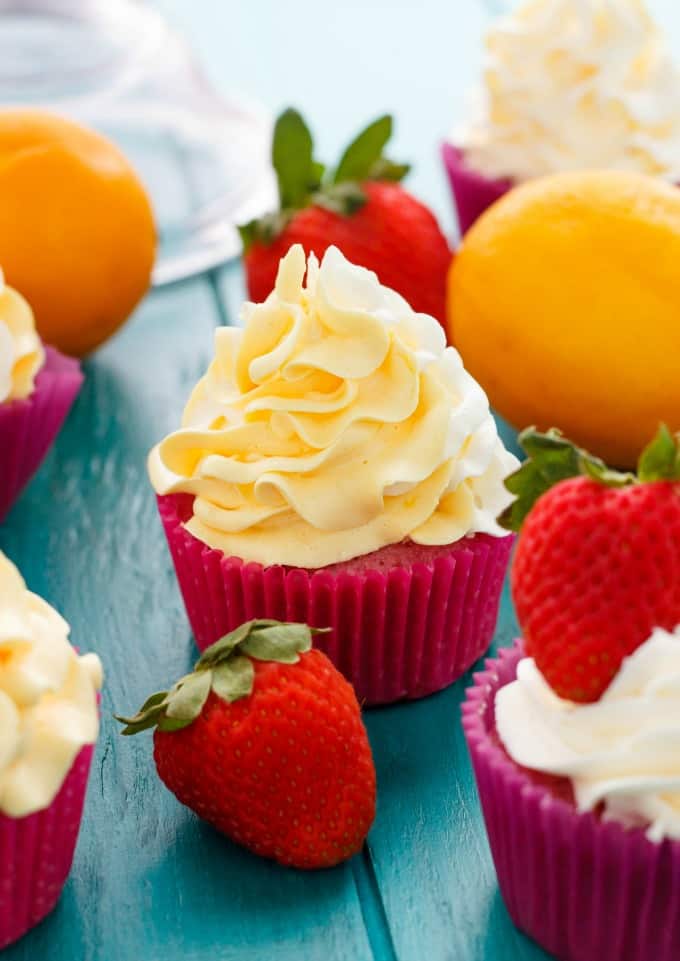 Okay, no more complaining! Need to calm my nerves, and writing helps! With Dan being off for almost 10 days, his coworkers were left with no sweet treats! I know, crazy! One celebrated a birthday during his time off so I wanted to make sure on his first day back to work he had something special to share. Now, these strawberry cupcakes with lemon swiss meringue buttercream were created for a couple of reasons. First, I have made an inverted recipe in the past: lemon cupcakes with strawberry swiss meringue buttercream. They were amazing! One of my favourites! I wanted to revisit them for an Easter recipe, so that brings us to today’s post.

Another reason I wanted to make these strawberry cupcakes with lemon swiss meringue buttercream was for the fact that every strawberry cake recipe I see online calls for Jell-O, not real, fresh strawberries… I do not care for Jell-O at all, and really wanted to make a cake using fresh strawberries. I worked with my basic vanilla cake recipe and adjusted accordingly. I found my first batches came out quite dense. It sucked because I had decorated them with the lemon swiss meringue buttercream perfectly! I mean seriously, that has to be my best swirl to date! I even put half white frosting, half yellow frosting into a bag to give it a ice cream two-tone swirl look. 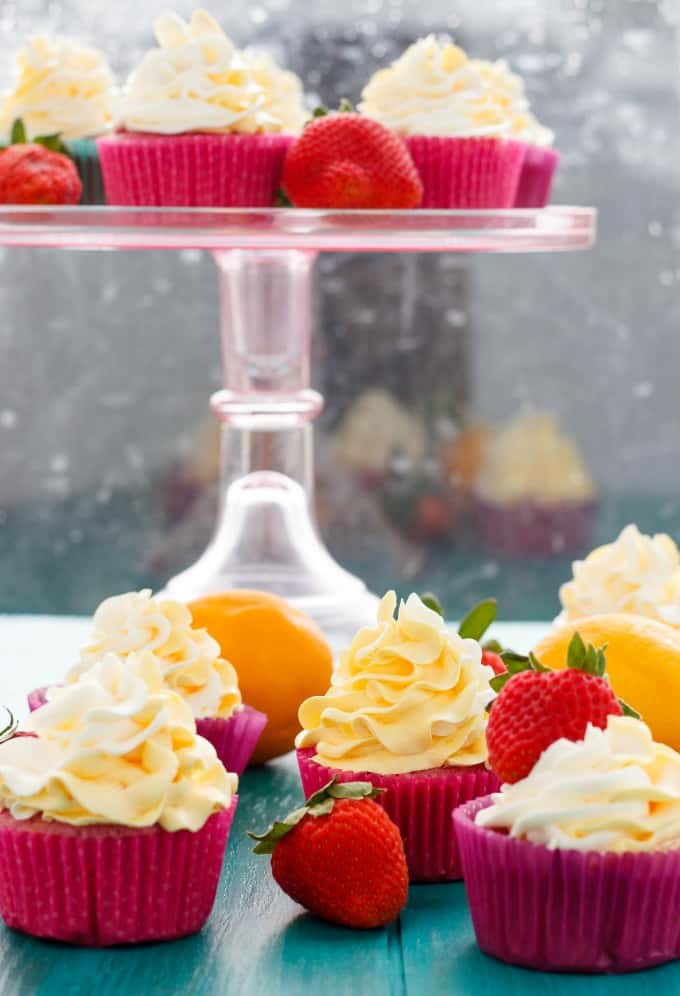 Arg. His coworkers enjoyed the cupcakes, but I was not happy. So, the following day I revisited them and adjusted the recipe by leaving out more liquid. These strawberry cupcakes turned out perfectly! Of course, I always find re-whipping buttercream never results in the same silky, smooth texture as the first day, so my piping was a little off, but I wanted to show the difference in the two cakes.

I blame the first batch being off because I did not have any counters to work on and I seriously wondered if I left out the baking powder since my cupcakes barely raised! The second batch worked out so well, I totally scrapped the first recipe and rewrote it. As for the lemon swiss meringue buttercream? To die for!

The cupcakes become a pretty pink naturally, but I added some red food colouring for pop! 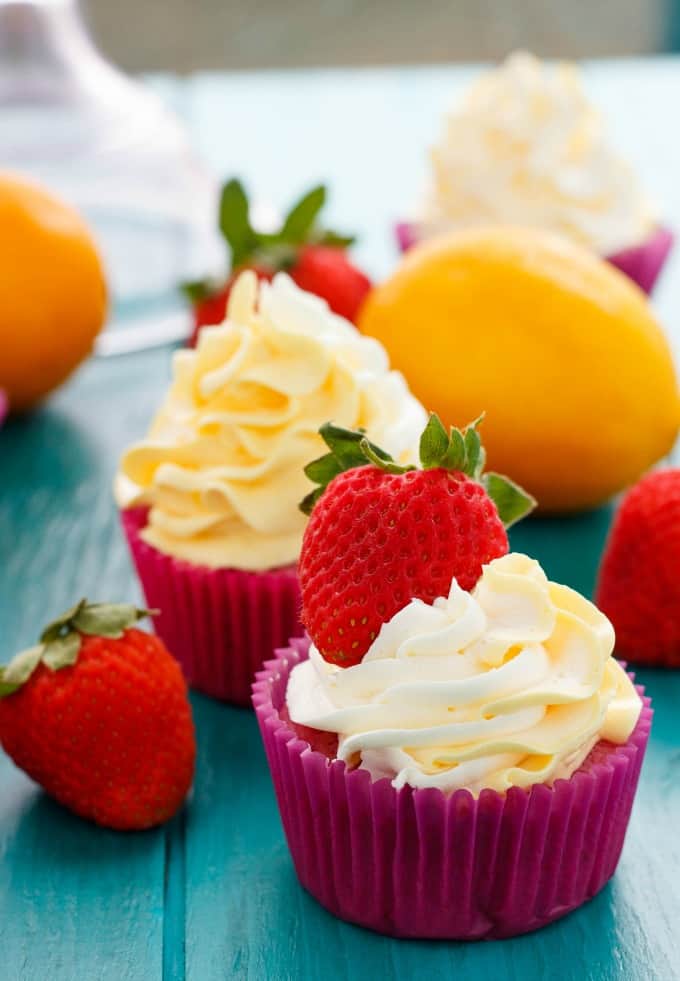 I love natural food colouring in recipes! These strawberry cupcakes with lemon swiss meringue buttercream are a mix of both artificial and natural. The red of the strawberries does pull through in the cupcakes, but let’s be honest, there is no way that buttercream is turning yellow with just fresh lemon juice. Feel free to omit the colouring altogether; I was going for an Easter/spring feel about these desserts.

One last note: use freshly squeezed lemon juice, PLEASE. The artificial lemon extract will not cut it. You will notice a difference. I used just under 1/4 cup of lemon juice, but only at my daughter’s request. It is not sour at all, and I have no problem with the full 1/4 cup. The lemon zest only adds more flavour, but if it is not your thing, omit it!

Love these strawberry cupcakes with lemon swiss meringue buttercream?! Try some of these recipes: 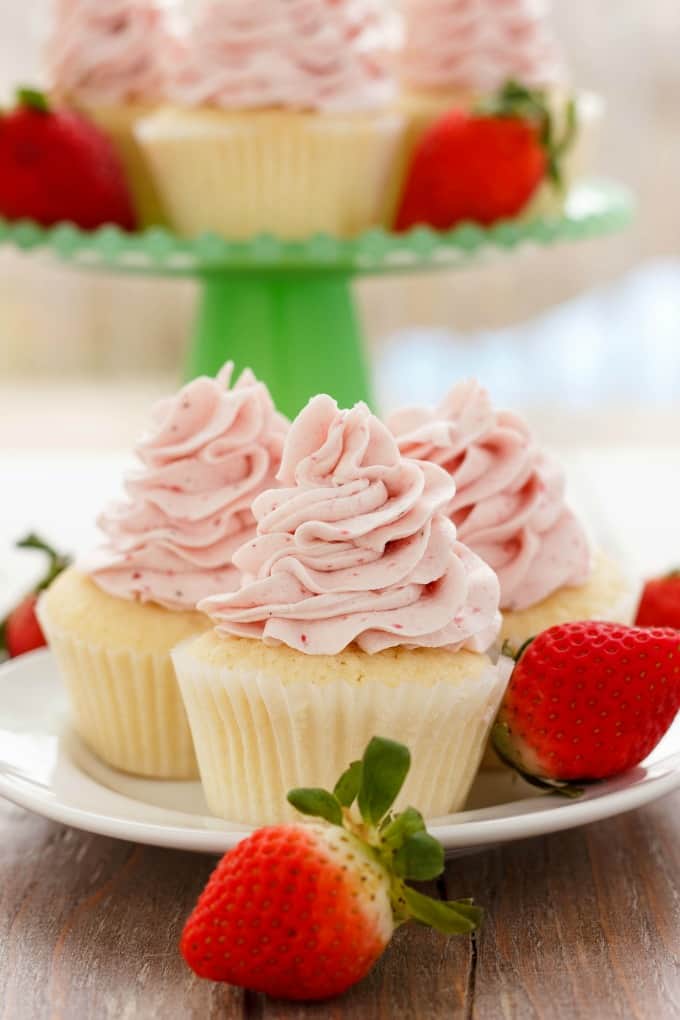