Pan-fried Creamer potatoes and bacon with a yogurt-chive sauce is a perfect side dish to a large meat-based meal! Find out more with my latest recipe working with The Little Potato Company and their Creamer Potatoes! 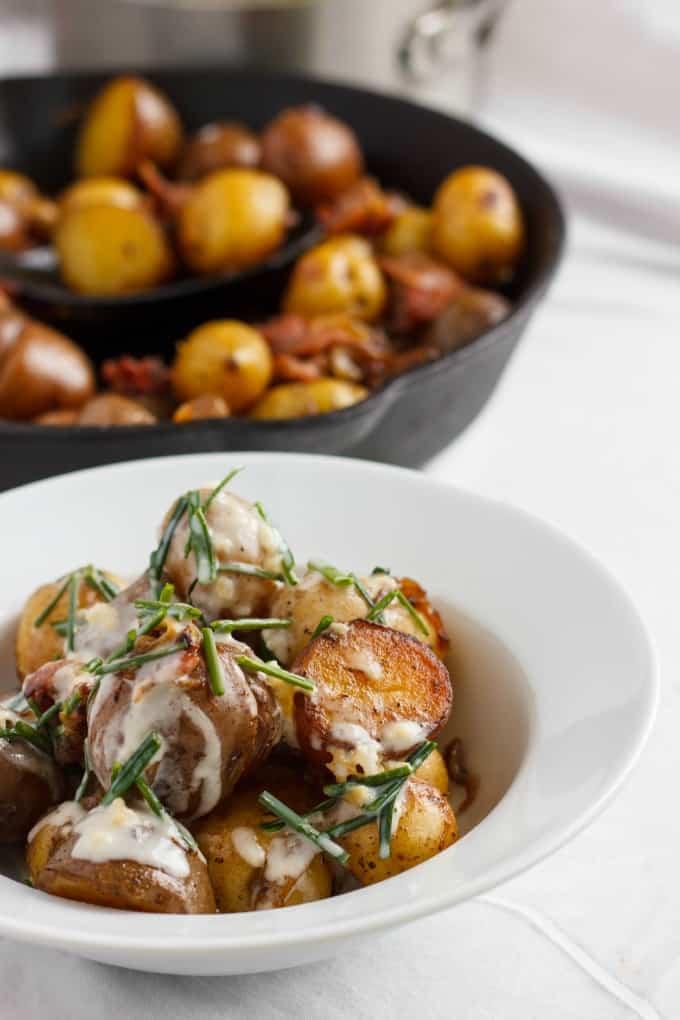 I have had some comments and emails from readers asking me what to pair with a specific main dish. I never realized how bad I was at it until these questions began pouring in! I mean, I do make sides, but often I eat those sides as mains because the main course is a meat recipe and my side is usually a vegetarian recipe(working perfectly for my family.) Plus, with my need to create new and awesome recipes, I often make a couple throughout the day, resulting in my daughter and husband eating meals throughout the day that would not normally be deemed “main-dish material.” Even today’s pan-fried Creamer potatoes and bacon with a yogurt-chive sauce recipe was made early enough where it was still lunch, but not late enough for dinner. After shooting some photos I asked the family to be my taste-testers and soon afterwards my husband told me: “I am eating all of this today.” That is an awesome compliment for me! 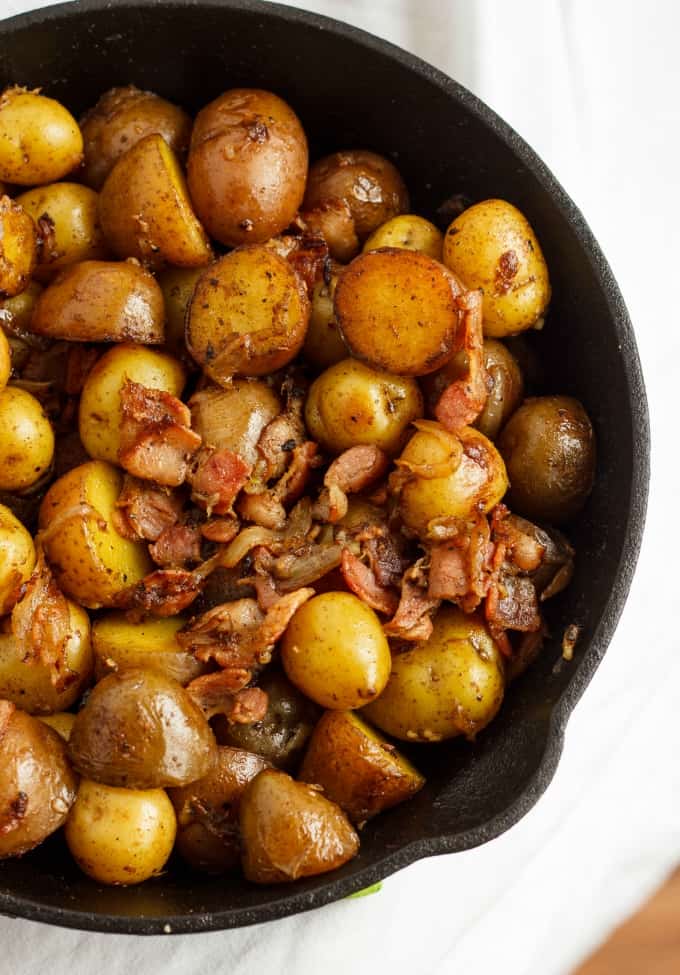 The inspiration for this recipe actually came from another Little Potato Company recipe that I made in the past, and is probably one of my most popular recipes. It is where my journey began and how I became introduced to The Little Potato Company (just over 8 months ago!) Since then, the adventure has been an amazing experience and I have created so many potato recipes that have become regulars here in our household. It is amazing what you can do with Creamer potatoes, and some meals are made even easier with the use of The Little Potato Company’s Microwave Ready Packages. They are the perfect side when I finally say “enough!” after cooking all day! 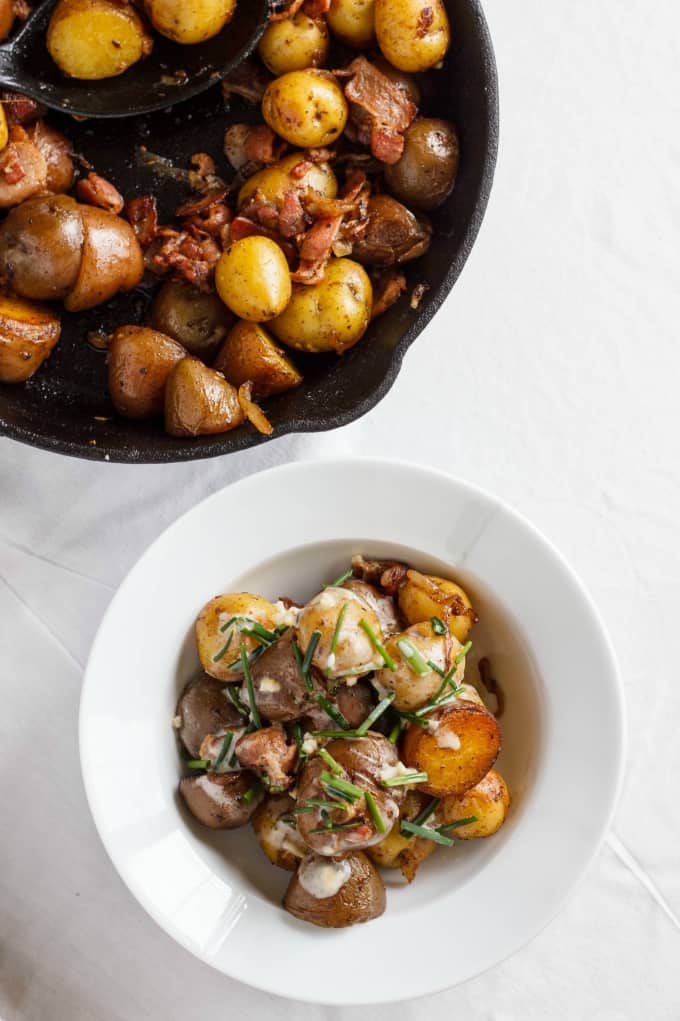 But on day’s like this, where cooking is all I can think about, I have no problems using their 1.5 lb bags (and the fun part is choosing which potatoes you want to use!) To be different, I decided to make these pan-fried Creamer potatoes and bacon with their Blushing Belle and Baby Boomers products because I wanted a varietal of flavours and colour. Over the course of 8 months we have been able to try 99% of The Little Potato Company’s potatoes and have loved every one! I still want to get my hands on a package of Something Blue potatoes, but I am sure that will happen one day 🙂 I mean, this is just an excuse to remake these pan-fried Creamer potatoes and bacon in the future.

Pan-Fried Creamer Potatoes and Bacon with a Yogurt-Chive Sauce 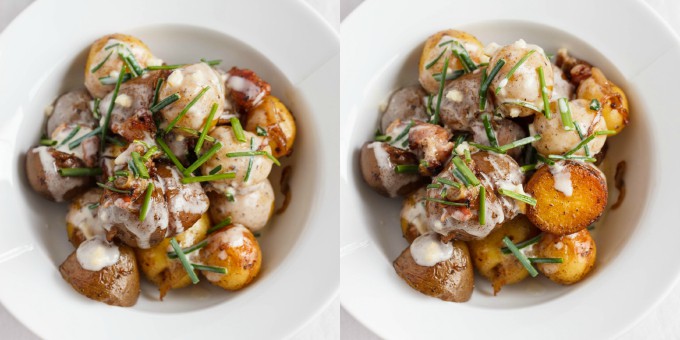 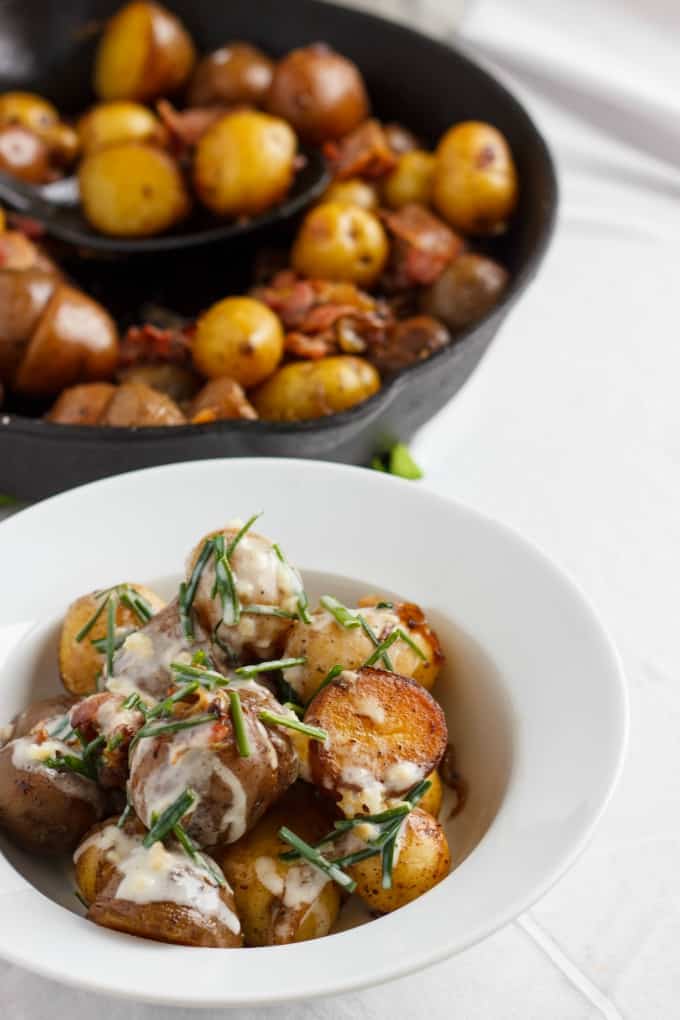 I know I have said it many times, but with back to school upon us we are all looking for recipes that stand the test against time, deliciousness, and ease of production. Breakfast is NOT my favourite meal to make at all. I feel I am not awake enough to function properly and I definitely am not imagining how my food will photograph as I make it. This being said, I am really worried what I am going to make my daughter every day before school. I am not a cereal eater, and she is, but I find that soooo plain! Dan is the same; he prefers something with a bit more sustenance (like these pan-fried Creamer potatoes and bacon.) We could technically have a dish like this prepared in time when she got up in the morning if I made the yogurt sauce the evening before while pre-boiling potatoes… Hmm, maybe I am panicking over nothing! 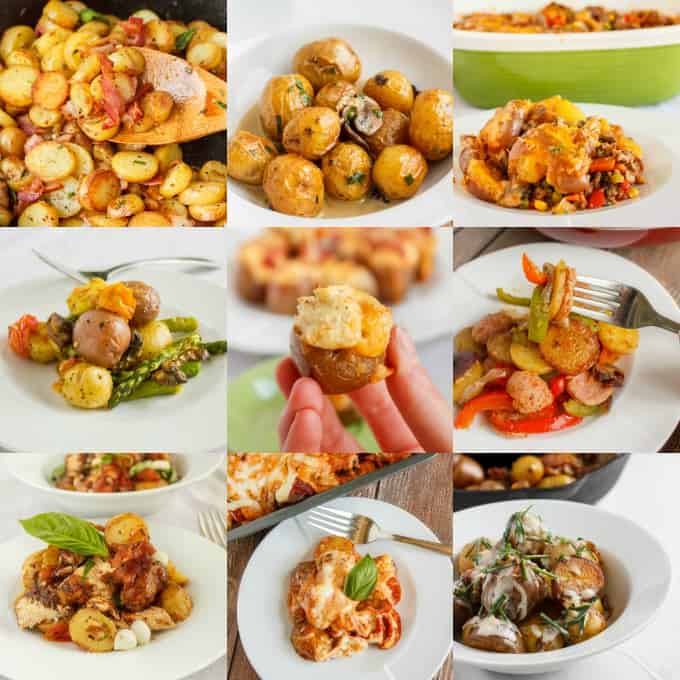 As a thanks to The Little Potato Company, I have decided to share all the recipes I have made over the past year working with them! Be sure to check them out because you can never go wrong with potatoes 🙂

This is a sponsored post. I was fortunate enough to receive products and monetary compensation from The Little Potato Company. Though products were received, all opinions are my own and I would not recommend a product that I did not enjoy.